An ostensibly superficial injury caused by a van falling off a jack resulted in a $2.2 million settlement for plaintiff Kenneth L. Ferguson, who suffers from reflex sympathetic dystrophy. 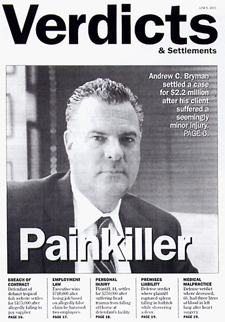 Hell may look different to the many religions of the world, but patients suffering with reflex sympathetic dystrophy agree on one thing: their condition feels like it.

The 46-year-old continues to suffer from the mysterious syndrome since receiving what seemed at first like a minor injury to his left hand and wrist while helping a co-worker change a tire on a company van.

Immediately after the April 1998 accident, Ferguson could move the fingers of his left hand. He had no fractured bones, not even a sprain, and barely a skin abrasion. Now his entire arm is useless, he says.

He's seen an army of doctors, eight are listed in the court documents. They prescribed pain medication and physical therapy. But without a cure, he sank into a deep depression, even contemplating suicide, court records show.

Bryman pushed through a $2.2 million settlement despite heavy resistance from the jack's manufacturers, distributor and retailer, all named as co-defendants.

Not only did they blame Ferguson and his co-worker's supposed negligence for his injury, but one of the manufacturers also accused the plaintiff of 'malingering' and exaggerating his symptoms, documents state.

On the day of the incident, Ferguson worked as a security guard for the Rand Corp. in Santa Monica. To assist his co-worker, who wanted to replace a flat tire, Ferguson brought out a 1995 model hydraulic scissor jack, the "Effortless Tire Changer," which he bought new at automotive parts retailer Pep Boys in late 1997. He had never used the jack before.

Neither Ferguson nor his co-worker bothered to read the warnings and instructions that accompanied the jack. Bryman argued that these directives would not have made a difference, the defendants contended that, as a result, the two employees placed the jack at a point too far below the van's axle. They asserted that this led the two employees to pump the lifting mechanism beyond the recommended maximum height of 14 inches.

Needing to raise the vehicle a little more, the two employees placed a couple of pieces of wood underneath the jack. One of the defendants termed this maneuver "grossly negligent" in court papers, but Bryman alleged in court records that placing materials under the jack is "not an uncommon practice, and one that is foreseeable."

As the two employees attempted to place the spare tire onto the hub, they heard a loud noise, and the van came off the jack.

Ferguson's left hand and wrist got caught between the tire and the wheel well under the van's fender. Ferguson says he never recovered.

Engineer 'Made the Case'

Attorneys on both sides agree that the lawsuit turned in the plaintiff's favor based on the deposition of Saied Hussaini from Miami-based Rally Manufacturing Inc. Rally designated Hussani the "person most knowledgeable" about the jack. "I think it made the case," Bryman says.

The company knew as far back as 1994, Bryman contended, that the jack posed a serious risk of injury. He alleged that additional devices, such as a pressure relief valve, could reduce the danger. Yet Ferguson's 1995 model didn't provide that kind of protection to consumers, Bryman alleged.

At one point during the deposition, Bryman asked Hussaini whether product safety was the company's top concern. According to the transcript, Hussaini replied, "You know, it's not - well, it's - it's a priority. I wouldn't call it No. 1, but, you know, I have other tasks, so..."

Not only did Rally suffer from Hussaini's deposition, but so did Ta Ta Industrial Co., its Taiwanese subcontractor.

Bryman settled the case before deposing any Ta Ta officials, but he says they "may be even more culpable" than Rally's because they performed most of the manufacturing work.

Irrespective, the company did pay $1.7 million, far more than any other defendant.

Ferguson once led a vigorous life as a motorcycle racer, mountain biker and karate instructor. Now he struggles to button his shirt and wash the dishes.

While no one doubts Ferguson suffers, Ta Ta attorneys believe much of the pain is psychological. They dispute his claim that reflex sympathetic dystrophy is a physical disability.

The medical community is split over the nature of the malady, Frederick says.

"It is poorly understood, frequently undiagnosed or misdiagnosed," he says. "Too many doctors think, 'It's all in his head.'"

Contact The Law Office of Bryman & Apelian for a free consultation

If you need a high quality personal injury law firm, reach out to The Law Office of Bryman & Apelian online or at 818.225.5151 to schedule a confidential, no-obligation consultation. Our firm operates on a contingency fee basis and keeps flexible hours to accommodate your schedule, and our lawyers can travel to meet you at your home or hospital room. We look forward to helping you receive compensation from negligent parties.